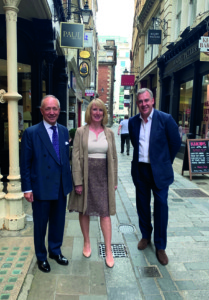 Your Ward team, Alderman Sir Roger Gifford and Common Councillors  Sir Michael Snyder, Alex Barr and Tracey Graham were acutely aware  at the start of the COVID-19 crisis earlier this year that their multi-faceted civic role would have to adapt. The team’s focus therefore moved immediately to one thing, and one thing alone: that of supporting all the Cordwainer community (which is mostly businesses, but also includes a small residential population and rough sleepers) through the pandemic.

Most of the work was in managing the many inbound enquiries on business rates or the package of government grants for small businesses, particularly for the retail, leisure and hospitality sectors. With government support evolving through the crisis your team became a central conduit for the distribution and interpretation of that rapidly changing information. Allied to this was analysing the support being offered by the City of London Corporation and making sure that our Ward businesses, where eligible, were able to easily access those support measures, particularly for those businesses that had definitional challenges around the nature of what they did.

Not every business can fall into a neat box, and Cordwainer in particular has a broad tapestry of businesses, a nod perhaps to its entrepreneurial early history.  The Ward team was able to articulate this wide variety of business models to those that needed to understand (and release payments). In certain cases this was of relatively small succour, but for some it was a lifeline.

Roger, Michael, Alex and Tracey are proud of the resilience and adaptability shown by our many smaller businesses, but equally understand that there is some way to go before full recovery. Whilst their weekly crisis management ‘Zoom’ meetings have now moved to a less frequent basis, their work on behalf of the Ward still carries on daily. The team are well aware that it is not, and won’t be ‘business as usual’ for some time, but are taking encouragement from current rising City footfall levels, and tube/train passenger volumes. Despite the headlines around the likely continuation of working from home, and September’s new restrictions on gatherings, the team have been gladdened to see at first hand some return of trade for those businesses that have partially reopened. Equally they know from their own commercial experience the competitive advantage that networking and physical business meetings can bring, and the culture management advantages of office working.

Cordwainer Ward has always been a dynamic place to do business and the team have been pleased to see some early return of confidence translating into Bow Lane trade, always a litmus test for broader activity.