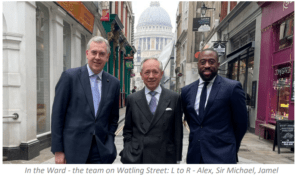 Following the City of London elections on 24th March 2022, Jamel Banda became an elected Common Councillor for the Ward of Cordwainer joining Sir Michael Snyder and Alex Barr. Jamel is a familiar face in the ward as a member of the Ward club and is currently Head of Treasury at Ghana International Bank located at 67 Cheapside. This follows Tracey Graham’s decision to step down as a Councilor however, she will remain a friend of the Ward in the future. We would like to take this opportunity to thank Tracey for her tremendous contribution during her time as a Councillor. Jamel Banda said  “I am delighted to be a Councillor for the Ward, which I have worked in for several years. I look forward to working with Sir Michael and Alex to continue the good work that is already evident in the Ward.”