Cordwainer Ward Women receive the Freedom of City of London

Cordwainer Ward Women receive the Freedom of City of London 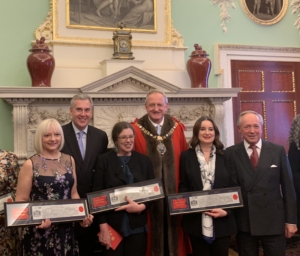 To commemorate the centenary of the Representation of the People Act in 1918 (‘universal suffrage’) the City’s Court of Common Council nominated c100 women to receive the Freedom of the City of London. Your Ward team were proud to nominate a number of leading women from Cordwainer Ward to receive this award. A drinks reception was held at the Guildhall Art Gallery on 8 March, International Women’sDay, with speeches from The Lord Mayor, Peter Estlin and the Chairman of Policy and Resources, Catherine McGuiness, with a number of the Cordwainer recipients in attendance. Many of the Freedom ceremonies have now been held, and Sir Michael Snyder and Alex Barr were proud to be there for the Mansion House Ceremony in April for Sue Hills (T Rowe Price), Allison Perrott (Sweetings Restaurant) and Mary Gilmore (Beauty Essence), all as the Lord Mayor’s guests. Also nominated, but unable to attend the ceremony was Jess Patel of the Bow Lane newsagents.