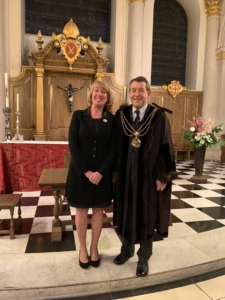 Tracey Graham won a resounding victory in the by-election for the Ward held on 30 April.  She attracted 79 votes as against just five for her opponent Timothy Becker.

Tracey succeeds Sir Mark Boleat, who resigned his seat in March after 17 years as an elected member, including five as the political leader of the City.

Commenting on the result Tracey said –

“I am delighted to have been elected to represent the Ward of Cordwainer on the Court of Common Council.  It has been a privilege to meet and get to know so many Voters over the last few weeks.  I look forward to representing their views in City decision making and setting service priorities.”