Home/Uncategorized/Barr, Boleat and Snyder elected as Common Councilmen
­
Previous Next

Sitting members Michael Snyder and Mark Boleat, and newcomer Alex Barr, were overwhelmingly elected as Cordwainer’s Common Councilmen for four year terms at the election on 23 March. Cordwainer’s turnout at 58% was the highest of any of the City’s wards.  The voting figures were –

Cordwainer’s Alderman Sir Roger Gifford announced the results in the polling station at St Mary Aldermary in the presence of all five candidates and a number of supporters.  Michael Snyder spoke on behalf of the three winning candidates in thanking the other two candidates for the way that they had fought the election, and also the officials for the efficient way that they had conducted the election. 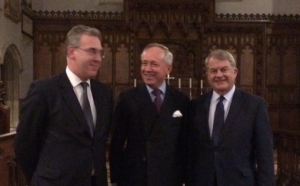