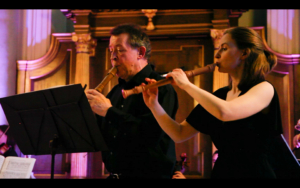 On 11th May, the Academy of St Mary-Le- Bow, the church’s resident orchestra performed a concert of Baroque Music. The programme was entitled “Flavours of the Baroque”, drawing attention to the composers of the works and their different styles. The concert was guest directed from the harpsichord by the Director of Music and organist at St Mary-le-Bow, Thomas Allery and led by baroque violinist Magdalena Loth-Hill. The evening opened with music by the seventeenth century English composer, Henry Purcell’s and his ‘Chaconny’ for strings. The resident conductor of orchestra, Alex Fryer was joined by Zacharias Wolfe to perform the solo in Antonio Vivaldi’s concerto for two oboes.

Recorder player Mary-Jannet Leith and Alderman Sir Roger Gifford joined the stage for an energetic and vibrant performance of Bach’s Brandenburg concerto no. 4 in G, featuring Magdalena Loth-Hill as solo violinist. The ever evolving recorder parts were masterfully delivered by Mary-Jannet and Roger, and the lightness of Magdalena’s solo line dazzled the audience. The concert closed with the charm of Handel’s concerto gross op. 6, no. 1 whose dance movements worked particularly well in the acoustic of the church. The orchestra used Baroque bows to perform, and worked on creating the phrasing and sounds which help the baroque music come to life.  Soloists Magdalena Loth-Hill, Mary-Jannet Leith, Zacharias Wolfe, Alex Fryer, and Sir Roger Gifford received a warm applause from the audience.  This concert represented a musical coming together of church music, The Academy of St Mary-le-Bow, and the Cordwainer ward in which St Mary-le-Bow sits.
By admin|2019-06-05T19:00:12+00:00June 5th, 2019|Uncategorized|0 Comments